skip to main | skip to sidebar

I'm now one of Them.

Officially.  There's a bag of soccer balls and a case of water bottles in the back of my SUV.  I'm a soccer mom.  Dear Lord PLEASE don't let a minivan be next.  (No offense to the minivan soccer moms out there.)  Honestly, I am SO excited about cheering my kids on in sports! 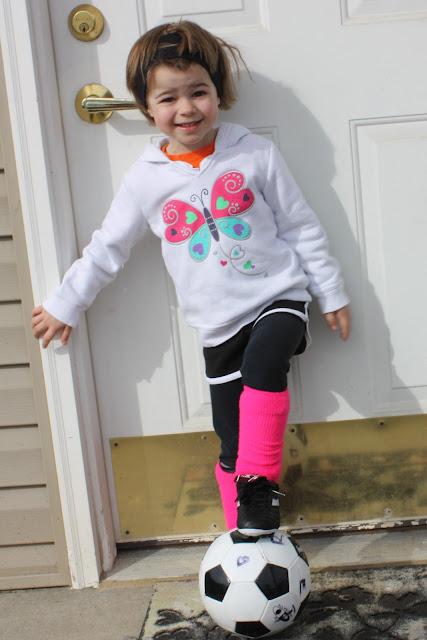 OF COURSE, little brother had to get in the picture... 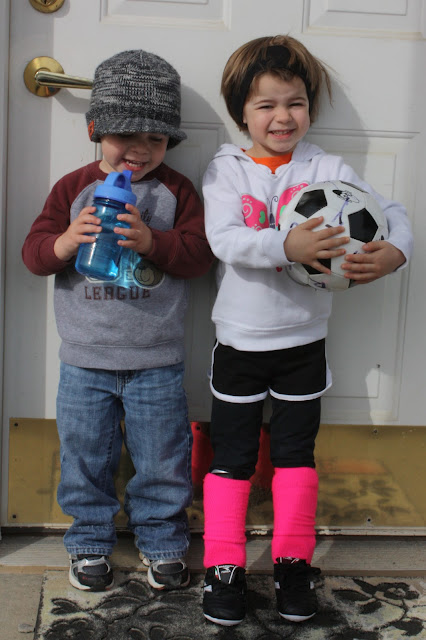 Here's the thing... I'm not sure she understands how soccer is even played.  She did a great job standing where she was told to stand, and then..... she didn't move.  She didn't chase the ball and join The Pack at all.  :)  I had to encourage her to RUN!  GO GET THE BALL!  GOOD JOB, NOW KICK IT!  :)
The hair.  Gracious. 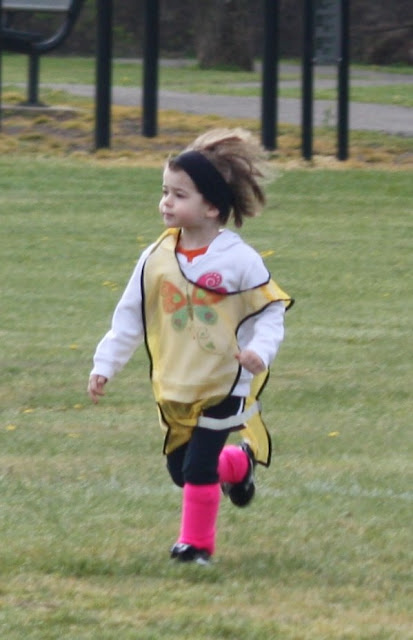 Running off the field, upset because she collided - slightly - with another player...  It was very minor, but required an IMMEDIATE drink of water from her new water bottle. 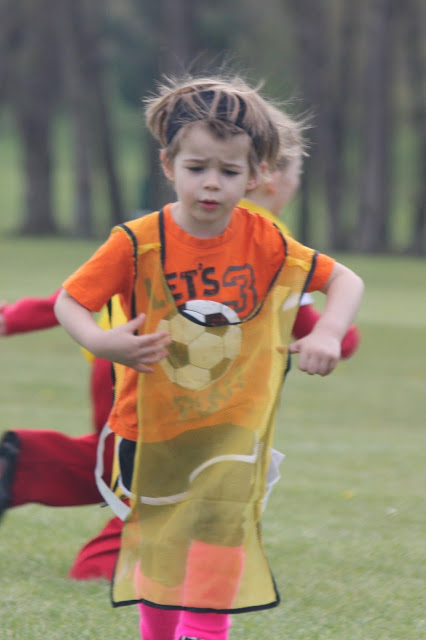 All in all, she did great!  She didn't sleep very well the night before, so I knew it wasn't going to go great today.  And I think she'll do much better next week when Coach Daddy is back in town.  :) 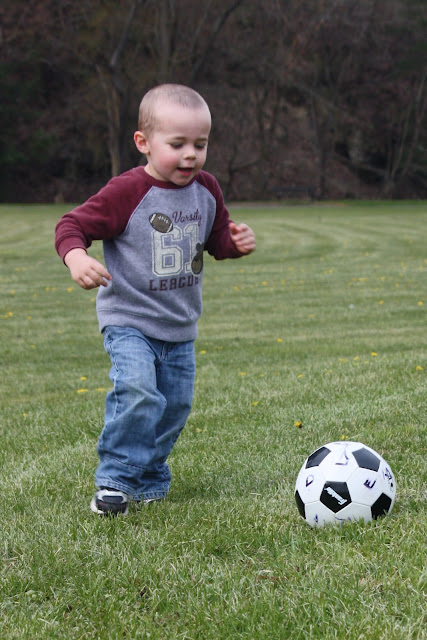 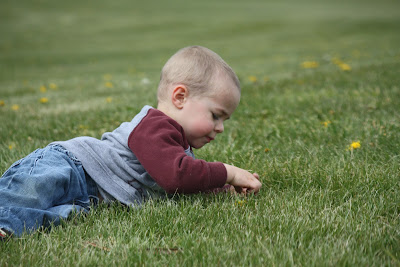 (I have so many other pictures of Ms. B playing, but I don't even know a lot of the other parents and have no idea how they'd feel about me putting their kids on the internet, nor a way to get their permission.  So I'll just refrain.)
Posted by Ann at 12:18 AM 1 comment:

B, while painting:  "Mom, what color is Tiny, usually?"

Me:  "Well, like when you color with crayons, when you're painting, Tiny can be ANY color you want her to be."  (We're really working on not being so rigid/uptight with our colors...  because, oh! my! goodness! the flip-outs we have over Mommy coloring things "NOT THE RIGHT COLOR!")

Me, snorting (But, also- SO PROUD of her for using 'to be' in the sentence!):  "Bridget, do you even know what 'precise' means?"

B:  "It means exactly correct."

Cue my stunned silence.  This kids' vocabulary!!!  I believe I was just schooled.
Posted by Ann at 5:26 PM No comments:

Apparently my kid has decided to become a Full-Fledged Pittsburgher.  She got ahold of some scissors while I was putting Spencer down for his nap, and gave herself a mullet.  A very respectable mullet- full on business in the front, party in the back. 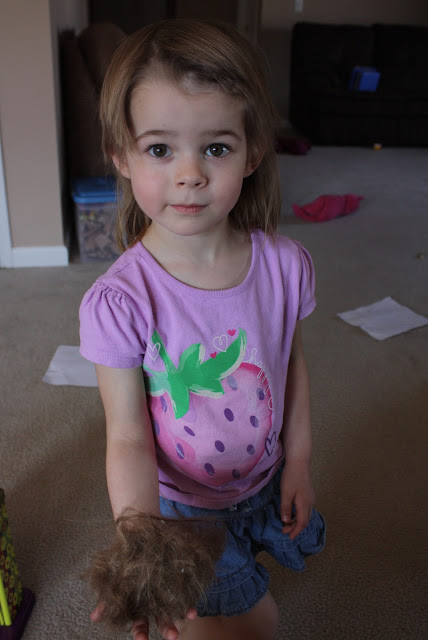 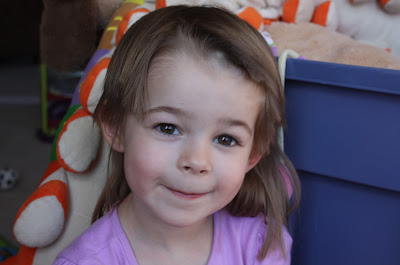 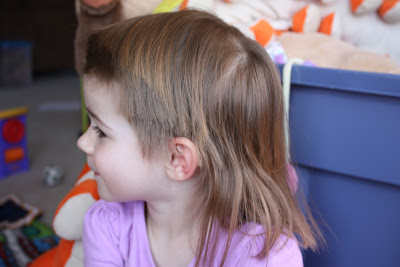 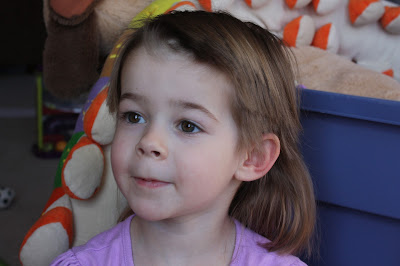 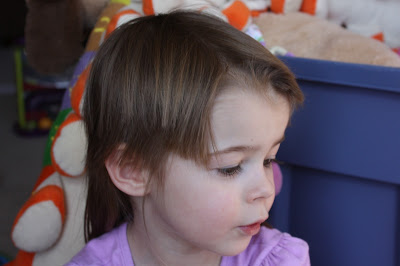 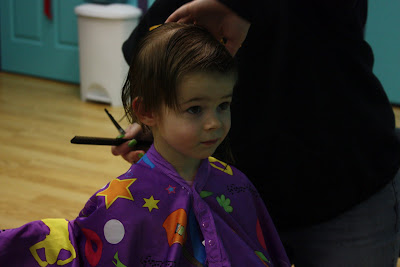 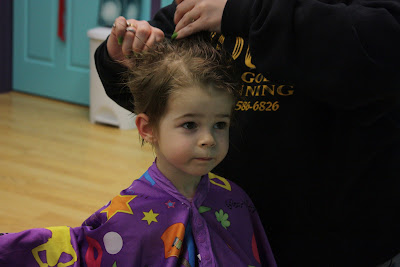 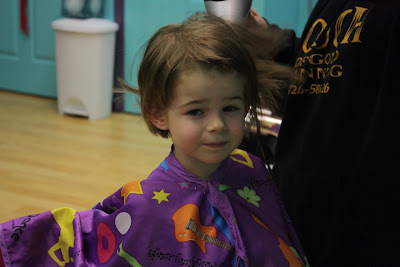 Then a quick trip to the store for lots of cute girly accessories because she was VERY upset because "no one will know I'm a girl!" 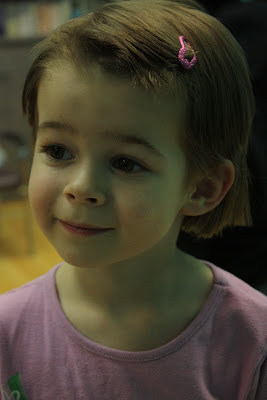 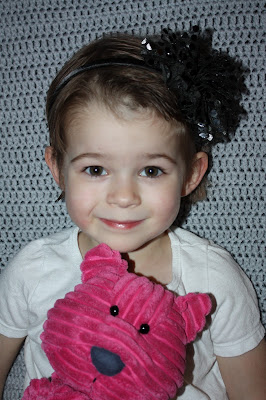 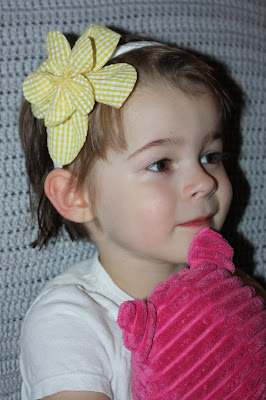 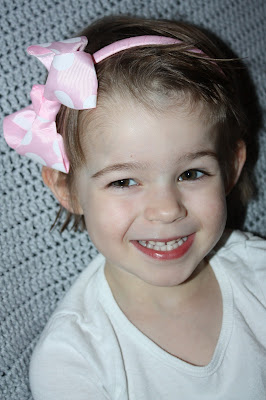 I know, I know it could be MUCH worse...  But this mama has learned her lesson.  All scissors will be triple padlocked in a safe during naptime from now on...
Posted by Ann at 9:30 PM No comments:

I started running again this past August...  Somehow in June, my youngest sister convinced me (and my other younger sister) to run a half marathon with her in November.  I felt badly because at the time, The Youngest was approximately 4,852 weeks pregnant and really missing her pre-baby (marathon-running!) body.  Boy oh boy, do I know that feeling!  So I thought I'd help her out and commit to a race with her.  For me it wasn't about how fast I could run the race, it was the training.  I need something to get me exercising again!


I really wish I would've started training at the time I agreed to the race in June.  My plan, at that time, was to start training immediately and to run in the evening, after everyone else went to bed.  I'm always up late, really late, so running at 9pm wouldn't be a big deal.  Except I didn't do it.  At all...  Like, not even once.

I needed a new plan.  Mornings were not an option.
#1 I am not a morning person (see above- up really late at night.)
#2 The Hubs gets up before the Butt-Crack-of-Dawn.  (Seriously.)  So running before he goes to work is not an option, unless I wanted to run at 4am.

So I started running during/right after dinner.  I'd make dinner, get ready to run, get the Hubs & kiddos eating, then take off.  Not really my favorite, since I was missing Family Dinner Time.  And it's dark out in the Fall in PA.  But.  It works. 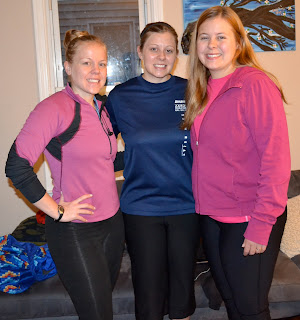 Before running the Western Reserve Half Marathon 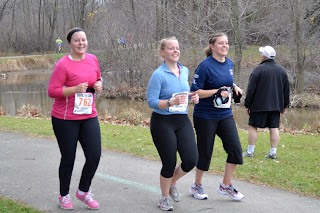 The finish line is in sight!

The half marathon ended up turning into a quarter marathon- we only did one lap, instead of two- and I barely made it through that.  Seriously.  Three weeks before the race, I got The Plague, so training came to a halt (and during the race, an inhaler that the doctor prescribed was needed to stop an asthma-like attack.)  There were Female Problems (yeah... I won't elaborate.)  The road was sloped, and my hips revolted and did NOT like it one bit.  It was a struggle for me, but my sisters helped me through!  They were awesome!  (Hubs claims he's going to make me a "6.05" sticker to put on the back of my vehicle.)  I cried (bawled) when it was over.  Out of disappointment.  Out of relief.

After that race I kinda stopped running for a bit.  I was discouraged.  Then The Youngest decided she needed another goal, to keep her running.  A new race!  An attainable distance!  At the local park next to mom & dad's house!  Flat terrain!  Surprisingly, I agreed.  Eagerly, almost.  I was so excited for this race.  Why?  I don't know.  Redemption, perhaps.
I started running again in mid-December and discovered that I love outside winter running.  No sweat dripping everywhere.  No dogs outside to chase you.  I don't even listen to music anymore because I'm concentrating on my steps so I don't slip on the snow & ice.  I KNOW!  It sounds like insanity, but I love it.
So, at the end of January, The Youngest and I ran the Chilly Cheeks Five Mile Challenge.  The Middle Sister didn't join us because of an awful snow storm the night before.  Yeah...  I said an awful snow storm the night before the race!  The course had some ice, but nothing I hadn't dealt with before.  There was only one hill, and if you know where I live, a hill is not a big deal...  but the downhill part of the was on the sledding hill of the park.  That means they didn't plow that portion of the race.  We had orange painted lines in the snow to follow, and a path of others before us.  It was fun!  I felt great!  Hallelujah!  Redemption!  We finished 2 seconds under our goal time.  We had fun.  There were no problems along the way.  It was just what I needed! 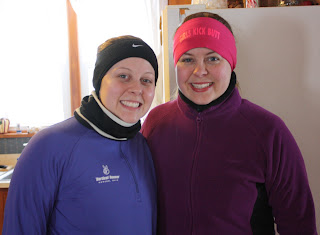 (The Youngest sent me my "girls kick butt" headband after our previous race.  She said she was proud of me for pushing through and finishing what I had said I was going to do.  She probably thought I was going to die, and was impressed when I didn't.)

Now I don't have a race to work towards, but I am still running.  There are plenty of 5K races available in the spring, and I am going to be ready!  I am excited to find another one that I can run with my sisters!


All that to say.  I bought new running shoes when we started this whole process.  They are pink.  I am NOT a fan of the color pink.  I tried not to buy them.  I looked and looked for other shoes.  But the gods of running have cursed me, and every super comfortable item of running clothing that I find, the only color available in my size is pink.       Pink.  Not cool.
Posted by Ann at 5:22 AM 2 comments: 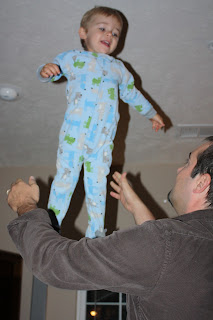 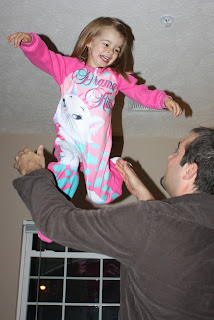 Looks of pure adrenaline and joy.  When we ski, they're going to be jumping off of cliffs with Daddy, aren't they???  Excuse me while I go get a prescription for Xanax.
Posted by Ann at 1:00 AM No comments:

Three year olds are good for my self-esteem

I have kind of an open-door policy in the house during the day.  I mean, I generally have company no matter where I'm going...  Ya know what I'm sayin?  So when B walked into my bedroom with me while I was putting on a clean pair of jeans, no biggie...

She then got smothered in hugs and kisses b/c she loves her Mama, just the way I am...  even when I don't like the bigger bum.
Posted by Ann at 4:56 PM No comments:

To all you brave souls out there that photograph kids on a regular basis...  My hat is off to you!

This is my failed attempt to get a picture for Grammy & Papa's picture frame. 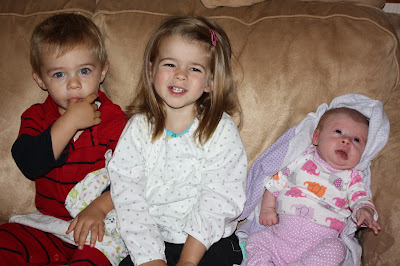 Hmmm, let's see.  A thumb-in-the-mouth toddler, a grimace-smile from the preschooler, and a very awkward newborn face.

Let's try that again, shall we? 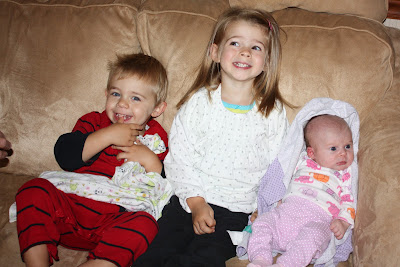 This time, I got a slouching toddler, an eye-roll from the preschooler, and a newborn looking away. 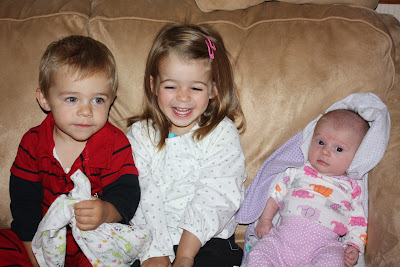 A non-smiling toddler, a giggly preschooler, and a newborn that is looking at me!  Eh...  one out of three ain't bad.
Posted by Ann at 12:28 AM 1 comment: